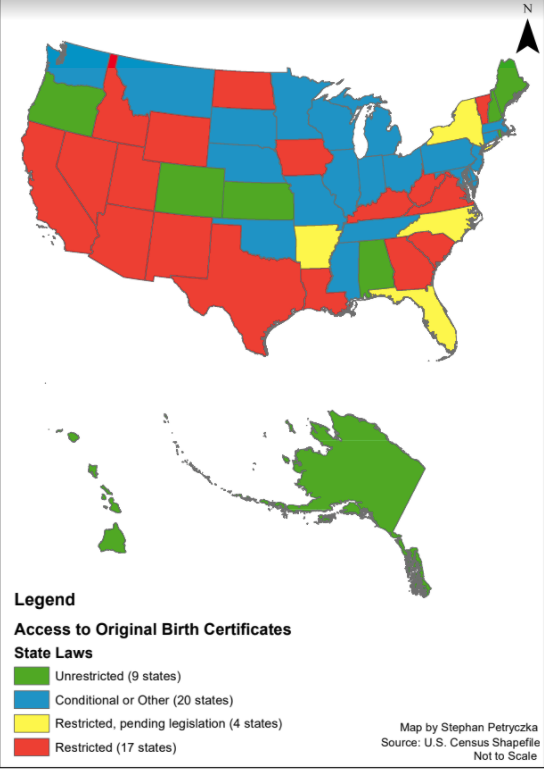 This color-coded political map indicates how different states have supported or not supported adoptees’ rights to access their original birth certificates. The source of the information comes from Adoptee Rights Law, an organization committed to furthering the rights of American adoptees.

Why is it so important to access original birth certificates? The truth is that adopted people know they’re adopted and often want answers. This doesn’t mean that you’re rejecting your adoptive family. It’s simply human nature to wonder where your nose or your eyes came from.

Beginning in 2005, adoptees 18 years of age or older who also know the identities of their birth parents may obtain a non-certified copy of their OBC without the need for a court order.

Adoption court records in Texas are sealed by motion of the court or on request of adoptive parents and may not be released except through a showing of good cause.

The Texas Vital Statistics Unit also maintains a Voluntary Central Adoption Registry, part of a system of public-private registries in the state. After a match, identifying information may be released through the registry on three conditions: 1) written consent to allow disclosure; 2) at least one hour of mandatory counseling; and 3) certification of the completion of counseling. The statute governing voluntary adoption registries in Texas is here.

Below are relevant laws regarding adoptees attaining their birth certificate.

Sec. 192.008. Birth Records of Adopted Person
(a) The supplementary birth certificate of an adopted child must be in the names of the adoptive parents, one of whom must be a female, named as the mother, and the other of whom must be a male, named as the father. This subsection does not prohibit a single individual, male or female, from adopting a child. Copies of the child’s birth certificates or birth records may not disclose that the child is adopted.

(c) The executive commissioner shall adopt rules and procedures to ensure that birth records and indexes under the control of the department or local registrars and accessible to the public do not contain information or cross-references through which the confidentiality of adoption placements may be directly or indirectly violated. The rules and procedures may not interfere with the registries established under Subchapter E, Chapter 162, Family Code, or with a court order under this section.

(d) Except as provided by Subsections (e) and (f), only the court that granted the adoption may order access to an original birth certificate and the filed documents on which a supplementary certificate is based.

(e) A person applying for access to an original birth certificate and the filed documents on which the supplementary certificate is based is entitled to know the identity and location of the court that granted the adoption. If that information is not on file, the state registrar shall give the person an affidavit stating that the information is not on file with the state registrar. Any court of competent jurisdiction to which the person presents the affidavit may order the access.

(b) If the court finds that the requirements for adoption have been met and the adoption is in the best interest of the child, the court shall grant the adoption.

(c) The name of the child may be changed in the order if requested.

Sec. 162.021. Sealing File
(a) The court, on the motion of a party or on the court’s own motion, may order the sealing of the file and the minutes of the court, or both, in a suit requesting an adoption.

(b) Rendition of the order does not relieve the clerk from the duty to send information regarding adoption to the vital statistics unit as required by this subchapter and Chapter 108.

Sec. 162.022. Confidentiality Maintained by Clerk
The records concerning a child maintained by the district clerk after entry of an order of adoption are confidential. No person is entitled to access to the records or may obtain information from the records except for good cause under an order of the court that issued the order.